What Is Python And Best Python GUI Framework 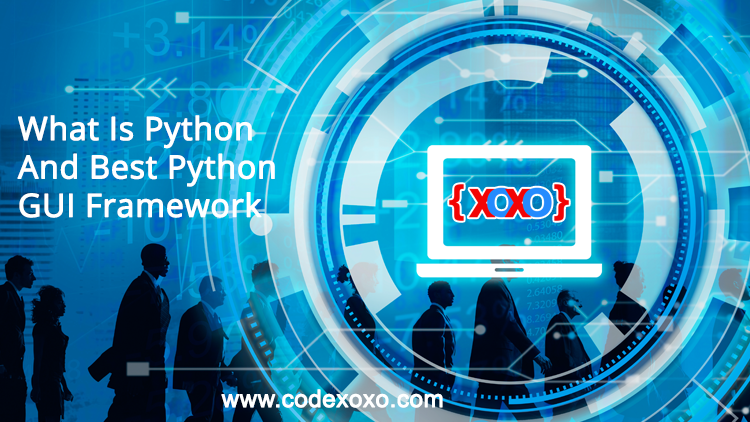 Python is the best, popular, and easy language among high-level programming languages as well as American’s IT’s syllabus. According to a survey, there are 4.3 million Python users available and uses some Best python GUI  framework which we discuss below.

Moreover, the Python language provides a long list of applications for web development and desktop graphical user interfaces(GUI). And this Best GUI python framework encourages us to study deeper about Python programming.
And another thing we link with the above paragraph that various languages are available in the world but most popular languages describes as Python, PHP, JAVA, C# language, Elixir, Rust, Swift, Go, etc.

Moreover, there are 256 programming languages available according to Google, which categorized on the base of alphabetical order.
Basically, yet python is used for programming but as well as we can create the graphical user interface.

As we illustrate some best python GUI framework toolkit below.

All of this python GUI has been employed in several applications development.

What is the Python language?

Python is an open-source, an interpreted, high level, and general-purpose programming language. Developed by “Guido van Rossum”, released in 1991 and developed by Python foundation.
The syntax of the python language is clean and the length of the code is short. It is fun to work in python languages with these features because you can work tension free rather than focusing on the syntax.
Python language is simple. Since it requires a unique syntax that focuses on readability, therefore, it is easy to learn. programmers can read and translate its code much easier than other languages. It offers dynamic typing and dynamic binding options that’s why it is attractive in Rapid Application Development.

Those days Van Rossum was working on a project, the project name was ABC. And he wants to find some scripting language like ABC in 1980. So we can say that he influenced by ABC. And ABC led to the design and development of the Python programming language.
Why this programming language’s name kept python.
Because he was a huge fan of a show “Monty Python’s Fly Circus” those days. So he kept its name as a Python and the first variant of the “Python 1.0” has launched in 1991. Now there are a various version of Python is developed up to 3.7.4 till July-8- 2019. 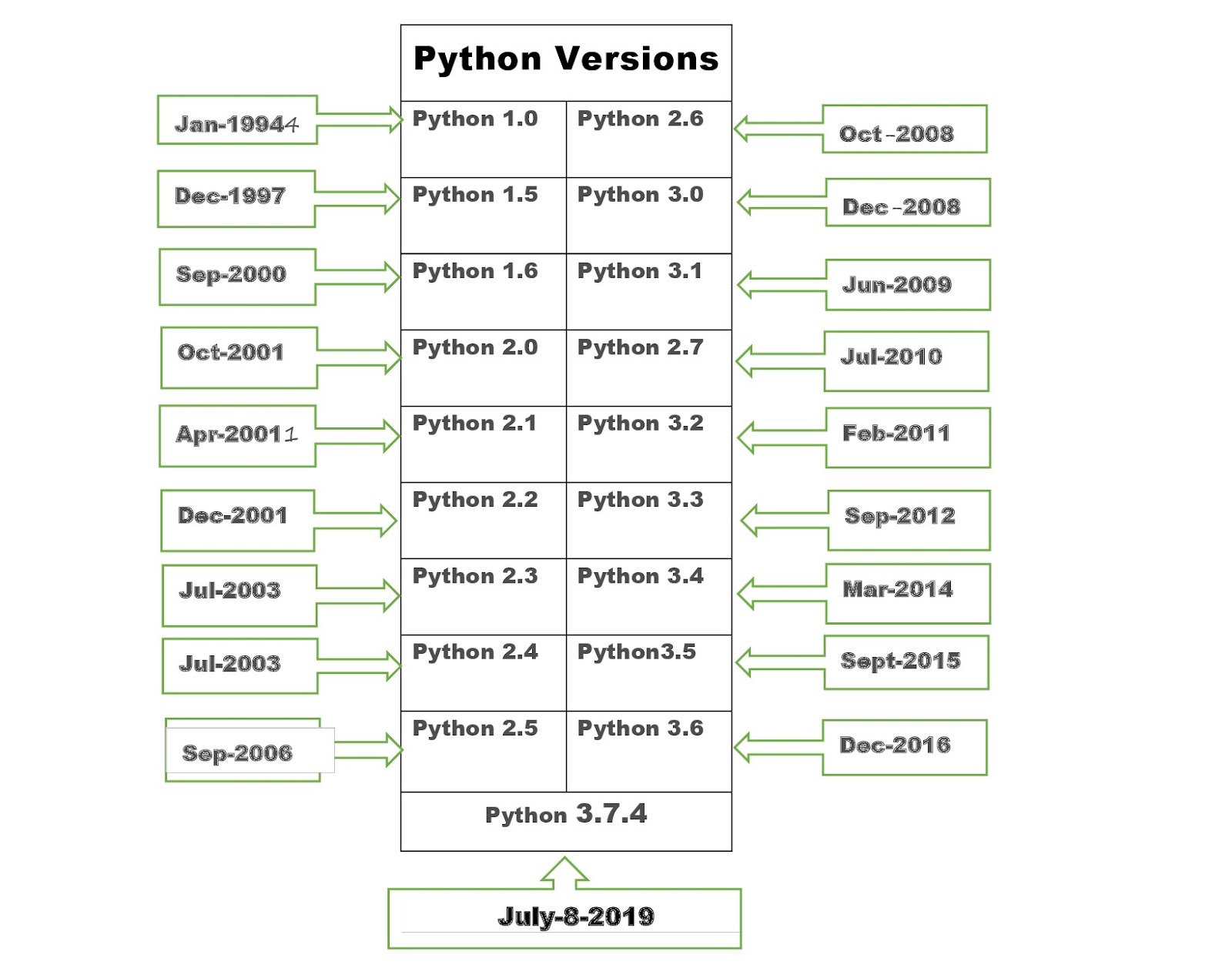 Python language is easy to learn for even a novice programmer. Its programming code is easy to read and you can execute a lot of complexes functionalities with ease because of its standard library. Python language also does not need curly braces to define blocks and indentation is mandatory.

Python language supports both the procedural and object-oriented programming paradigms.

Python is open source and freely available. You can download python for free and also its source code. The best part is you can make changes to it, and even distribute it.

In a language like C++, when you code your project, you may need to make some changes to it if you want to run it on another platform. But in Python, You need to code only once and you can run it anywhere. This is called W.O.R.A (Write Once Run Anywhere).

Python downloads with an extensive library. These contain code for various purposes like documentation-generation, regular expressions, unit-testing, web browser, databases, threading, CGI, email, image manipulation, and more. Therefore, we don’t have to write the complete code for that manually.

A plethora of frameworks

However, Python can be extended to other languages. You can also write some of your code in languages like C language or C++. This is especially useful in projects.

Python is embedded as well. It means you can put your Python code in your source code of a different language, like C++. Due to which, we can add scripting capabilities to our code in the other language.
Improved Productivity
Python’s simplicity and extensive libraries render programmers more productive than languages like Java and C++ do. In Python programming, You need to write fewer lets more get done.

We have already seen that Python code is executed line by line. But when python is interpreted, it often results in slow execution. However, this is not a problem unless speed is a focal point for the project. In other words, unless high speed is a requirement, the benefits offered by Python language are enough to distract us from its speed limitation.

Not for Mobile Development

Python serves as an excellent server-side language but still, it is rarely seen on the client-side. It is rarely ever used to implement smartphone-based applications which are called Collarbone. It is not so famous despite the existence of Python because it is not secure.

Not for High-graphic game

Python’s databases access layers are a bit underdeveloped as compared to more widely used technologies like Java Data Base Connectivity (J.D.B.C) and Open Database Connectivity (O.D.B.C ). That’s why it is less often applied in huge enterprises.

Why we use Python programming

Python has some advantages like high-level language, built-in data structures, dynamic typing, and binding, which makes it engaging for fast application development. It is available as open-source software and simply available to use. Python offers easy for debugging also if python throws an error, an exception will be accrued and stack trace will also get printed.
Python programming language is easy to learn and has various reasons for choosing this language.

Let’s come to the main topic.

What is the (GUI)Graphical User Interface ?.

Nowadays everyone is using mobile phones, computers and any other digital interface. And all have used Facebook and played games, but have you ever attention towards games and Facebook, that anything we post on F.B then how it shows images and text on his wall.
And also how the game interface changes every next stage. This all things happen just because of GUI.

In other words, any person can communicate with electronic gadgets through GUI is an interface like Mobile and Computers etc. This interface uses many icons and images or many more graphics tools for displaying information on gadgets.

We can access GUI in mobile and computer via finger and mouse. Where computer uses mouse and touch screen mobile uses a finger.

Furthermore, there are various GUI frameworks available in python. So that programmers don’t have to worry to move on another language.

You can use Flex to make (cross-platform) desktop applications, internet applications, As well as associate in Nursing export an app to a standalone HTML document. It conjointly works within the Jupyter notebook. Flexx may be a pure Best GUI python framework making graphical user interfaces (GUI’s), that uses internet technology for its rendering. Apps square measure written strictly in Python; The PScript transpiler generates the required JavaScript on the fly.

C.E.F is developed by Czarek Tomczak provide python bindings for available Chromium Embedded. However, you can develop HTML based graphical user interface and you can use HTML 5 GUI instead of standard GUI toolkit wizard.

Tkinter comes by default in Python language. You don’t need to install additionally. And it’s most popular GUI tool in python language.

Dabo’s is developed by Ed Leafe and Paul McNett. And it’s based on 3tier architecture also, a program written in Dabo’s can run on Windows, OS X or Linux, Dabo is for you! if you want to develop these type of applications.

PyForm originally developed for windows operating system which is based on Python3 framework however, Pyforms has set of 22 controls and every set based on ControlBase object. Moreover, PyForms includes video players, web browser and OpenGL.

First mobile API graphic is OpenGL ES 2, and Kivi is based on it. And it has a licence given by MIT. Furthermore, Kivi is the best GUI toolkit for python language, also, compatible with game development. Moreover, Kivi is versatile for OS. However, Kivi is famous because it uses the same language for the Windows platform and mobile platform. Another best thing is its open source.

How to install Kivi in Windows and Linux operating system?

It’s a type of a module which enables us to write an application using python language for GNOME and it supports GObject. It has been used since 2002 in many applications like GIMP image manipulator, for which GTK+ was developed.

Python has a tool for GUI named PyQt which is written in C++ language. However, it has developed by Riverbank Computing Limited. But even, it has two editions PyQT4 and QT 4.x. And both support almost all operating systems including Windows, IOS and android additionally there is PyQT5 available which is supporting the only desktop.

Let’s begin the installation of PyQt5 in our system

PyGuid is developed by Dr Greg Ewing. And his objective is to make easy GUI so that can work properly with Python language. Furthermore, Pyguid supports cross-platform which can run only Unix, Macintosh, and Windows platform.

As I said earlier that PySide and PyQt are the same and both are support windows operating system, IOS, and android but the only difference is that Paysite is an industrially licenced. If you want to develop an application for sale then you have to choose PySite.

Let’s begin the installation of PySide in our system.

Libavg framework made in C++ language and scripted by python. However, you can say it’s another third party library, besides, Libavg uses open GL for hardware acceleration like Kivi does. Also, you can run Libavg on Linux, Mac OS X and Windows, It’s licenced under L.G.P.L And, it’s open-source. Libavg is mostly used in artistic exhibitions. and it is Best GUI python framework.

You can read more here

You will also see Best GUI python framework in this blog